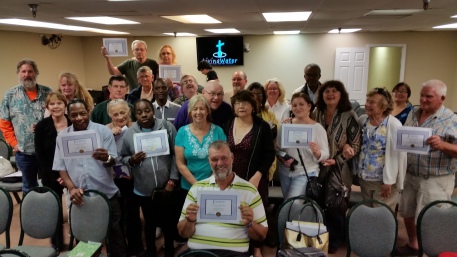 YOU ARE INVITED to Study the Book of DANIEL  every Wednesday at 7 PM and received a Certificate of Completion signed by Bible Teachers and the Pastor.  Paul was already a mature apostle of the Christ when he established this church. He can be described as: PAUL, the Apostle of Faith!

Christ's first Coming on earth was a very important event because sin was defeated on the cross and salvation became available to all who believed in His atoning sacrifice. When Jesus will come the SECOND time, He will take to Himself all who were saved by His death on the cross. Therefore, in 1 Thessalonians Apostle Paul teaches us about the Second Coming which will be the most important event in history. This book is very practical encouraging us to be spiritually alive, to put on the whole armor of God, to comfort one another, to build one another, to pray always about all things, etc. As you study this book, you faith will grow and your relationship with the Lord will be stronger. Above all, you will make the best investment of your time, being prepared to se the King of Kings!

The background of this event is in John chapter 7:

37 On the last day, that great day of the feast, Jesus stood and cried out, saying, "If anyone thirsts, let him come to Me and drink. 38 He who believes in Me, as the Scripture has said, out of his heart will flow rivers of living water." 39 But this He spoke concerning the Spirit, whom those believing in Him would receive; for the Holy Spirit was not yet given, because Jesus was not yet glorified. John 7:37-39." 46 The officers answered, "No man ever spoke like this Man." John 7:46.

John 8:1-4   "1 But Jesus went to the Mount of Olives.  Now early in the morning He came again into the temple, and all the people came to Him; and He sat down and taught them.

3 Then the scribes and Pharisees brought to Him a woman caught in adultery. And when they had set her in the midst, 4 they said to Him, "Teacher, this woman was caught in adultery, in the very act" . 5 Now Moses, in the law, commanded us that such should be stoned. But what do You say?" 6 This they said, testing Him, that they might have something of which to accuse Him. But Jesus stooped down and wrote on the ground with His finger, as though He did not hear." John's Gospel 8:1-6. "

Jesus was in danger to be arrested. Already the officers of the Temple wanted to arrest Him being sent by the Pharisees. Amazingly, they don't arrest Jesus but give a good report about Him saying, "No man ever spoke like this Man." John 7:46. The final plan of the Pharisees was to kill Him as we see later in John 11 when they began to plot together with the priests of that time-John 11: 46-48.

" Now early in the morning He came again into the temple, and all the people came to Him; and He sat down and taught them.." John 8:1-2. Jesus went back to teach and was not afraid of His enemies. Teaching was so important to Him and no wonder he spoke to His disciples later," Go and make disciples of all nations, teaching them…." Mat. 28:19,20.

It was the feast of Tabernacle when Jesus went to the TEMPLE in secret being mocked by his own family. In the Temple there were 4 large  lamps which represented their journey in the wilderness and the pillar of FIRE in the night. People were celebrating in the wooden booths and dancing the whole night. This is the  right TIMING when Jesus said I AM the LIGHT of the world!  I am the real LIGHT and the ONLY light.

In John 7:14 Jesus was teaching in the Temple and the officers of the Temple were probably sent there to arrest Him. In fact we read at the end of the chapter of the Temple:"Now some of them wanted to take Him, but no one laid hands on Him." John 7:44. The Pharisees also were angry with the officers-guardians who were unwilling to arrests Jesus-John 7:45.

LESSON: In spite of all the enemies, Jesus went back to the temple and taught the people! It looks to me that teaching the Bible was a very important task for Jesus as the Son of MAN because He was willing to risk His life for it. How do we treat the Bible today? How much time do we spend in God's Word? No doubt, our success or failure in life depends on the knowledge we have concerning God's Word. Remember," The man shall not live by bread alone but by every Word that comes from the mouth of God."

The Word is a LAMP.

The Word is a spiritual SWORD

The Word is spiritual FIRE

The Word is spiritual HAMMER.

The Word is LIFE that is feeding us!

The Word is contains WISDOM.

The Word is a spiritual COMPAS.

The Word is a spiritual DEFENSE.

The Word is DIVINE, from heaven.

If Jesus would have said, "DO not SONE her", He would have disobeyed the Law of Moses and He could have been stoned by the Pharisees!! It was a PLOT very well put together to destroy Jesus' ministry, but it DID not work because Jesus was not only the Son of MAN but also the Son of God!  Jesus began to write on the ground!

JESUS was tempted and won the victory. They had no reason to stone Him and He save the life of the adulterous woman by protecting her from the Pharisees, forgiving her and telling her," Sin no more."

JESUS was victorious when He was tempted.  What about us?  What do we learn?

Don't condemn others. Yes, there a time for correction, but our words should build up the people.
Don’t be in a hurry to speak; Jesus wrote on the ground and did not say a word.
Don’t get angry in difficult times and don’t cast the stone easily.
Do listen to the voice of God who is willing to help you to win the victory.
Do obey the Scriptures and the study the Word as never before.
Do speak the wisdom of God after you heard what the Lord is inspiring you.
Do give the glory to God ahead, before you went through. Praise Him for His help!